We were crouching next to a 2 foot pyramid of sharp black stones on the crunchy black gravel which surrounded us. The monochromatic moonscape stretched as far as the eye could see in each direction. John and I remained in this odd pose and peered across the dark jagged horizon in order to spot the next ahu or cairn like this one, which would define the next transect we needed to walk to safely guide us through this treacherous field. To deviate from the trail could end badly. This was Hawaii Volcanoes National Park in 1984 and the sharp rock we picked our way across was basalt Aa lava. To stray from the transect could result in a fall into a lava tube so we painstakingly and diligently searched for the closest ahu, but they were hard to distinguish, one from another, each jet black ahu from the jet black groundmass.

We took our time, paused for water and snacked on fruit and boiled eggs which we had managed to grab from the Kilauea Military Camp before we ventured out that morning. The hike to Pu’u Huluhulu, which means ‘hairy hill’ was only a 2.5 mile hike across the 1969-1974 lava flows from Mauna Ulu, but it would take about 3 hours due to the rocky terrain. As we paused, John took this time to check our position on the park map. Assured that we were on track, we picked our way onward. As we entered a kipuka, an island of life surrounded by lava flows, the sky was becoming overcast. I began to hear the unmistakable murmur of a waterfall and assumed we were nearing a stream. In this kipuka were Ohia trees – sparse, somewhat skeletal trees without a dense canopy. They did succeed in obscuring the ahu, however, and therefore our path. We held out hope that the path through these woods would lead us to Pu’u Hulululu. From that vantage point we would view Pu’u ‘O, which means ‘enduring’, and would have a view of many other volcanic vents that have built this great island, and of course we would see the Pacific Ocean, which indefatigably erodes the island.

Pu’u Huluhulu was easily 500+ years older than the lava fields we crossed but Pu’u’O was a baby vent; just recently active. But considering this was the Big Island of Hawaii, and we were standing on the flank of the most active volcano in the world, Kilauea, anything was possible. I studied the map again as I was perplexed; the map showed no stream anywhere near us, and yet the familiar sound of the waterfall grew louder.

As we exited the forest we resumed scouting for ahu. Our focus was down, on the ropey, pahoehoe lava which crunched satisfyingly like cake brownies beneath our boots. Ahead of us was the cinder cone Pu’u Huluhulu. We plodded on, still careful of each placement of our feet. The white sky, the black floor, and the rumbling waterfall was punctuated by the faint call of voices. We paused. There remained substantial distance between us and the start of the ascent to the cinder cone but we could make out figures of people on the Pu’u Huluhulu summit. They were smiling and waving. They were shouting and pointing. Pointing at us. We hiked carefully and waved back. We could hear them calling but the sound of the waterfall dampened their words. Now they were pointing again, more animatedly. We paused. They were not pointing at us; they were gesturing at something beyond us. As we turned around, clear of the ohia forest now, we were awe-struck; John and I were face to face with the source of the waterfall. Pu’u ‘O vent was fountaining 1500 ft into the white sky. She was roaring! Our waterfall was the growing flow of the enduring Pu’u ‘O.

With renewed fervor we almost ran. Now we had a cheering section to spur us on. When we reached the crest of the cinder cone we joined an unparralled group of volcano enthusiasts. Everyone of us was energized, thrilled at the fire and the fury before us. And John and I were the guests of honor. We didn’t realize just how close we had been to the erupting vent but the observers at that summit had watched us from the time we exited the ohia forest. They remarked that they thought we must be geologists studying or sampling the Pu’u ‘O vent. I informed them that I was a UH geology major, but never in my wildest dreams did I think I would be that close to an erupting vent of Kīlauea volcano.

A few euphoric hours were passed up there before folks had to decide the next course of action. Dusk was approaching. Plans were made. Some of the party remained, and the rest of us scurried down the ancient vent and scrabbled out of the jagged lava flows to our vehicles in record time, I know not how. There was a second wind in this group of newfound friends. We agreed to meet again after dark at the lookout on the cinder cone. John and I made a stop at the mess hall for a hasty half-eaten dinner, a dash into our cabin for our jackets and a blanket, then the all-important convenience store for flashlights, batteries, bread, wine & cheese; enough to share. And we were off for the rendezvous. We knew our way now – this was familiar land. Crazy red flares in the sky lit the way and lit our hearts. We felt privileged to bear witness to Pele’s power throughout the night. Transfixed by the primal rumble and the glow of middle earth we attended the best. party. ever. on Pu’u Huluhulu as Pu’u ‘O began the long-lived eruption that earned her the new name, the name you now know, Pu’u’ ‘O’O (enduring, enduring). That night, with the incandescence of all her liquid, magmatic fury, Pu’u’ ‘O’O had solidified my decision to be a geologist. 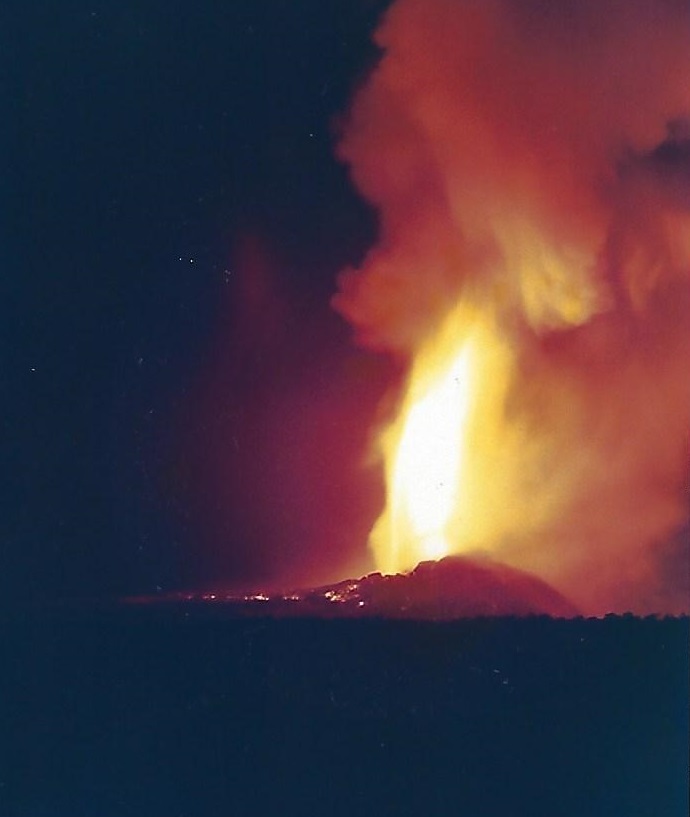 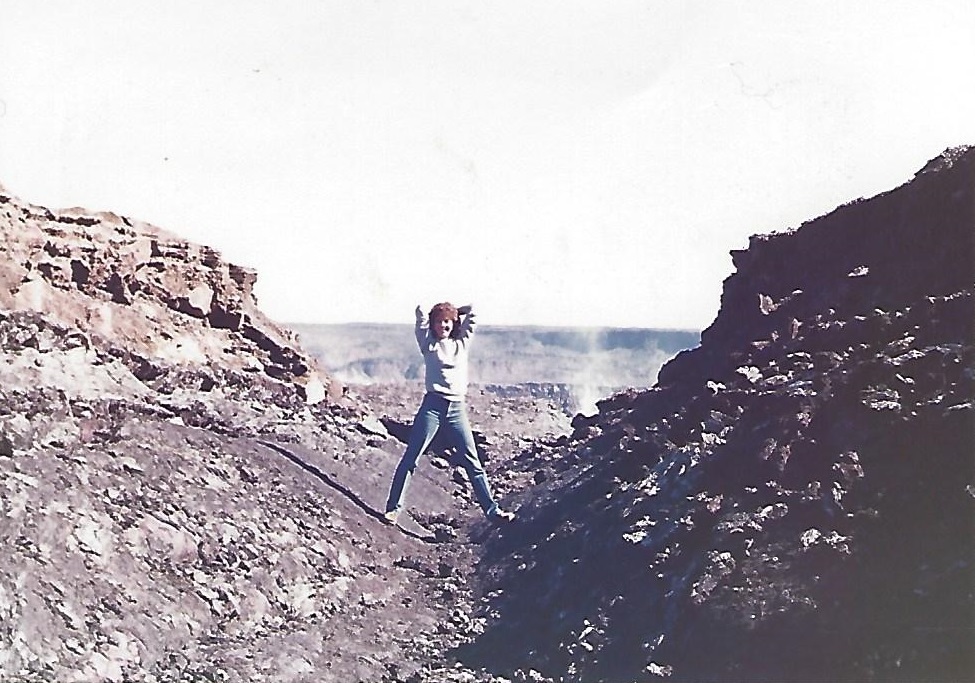 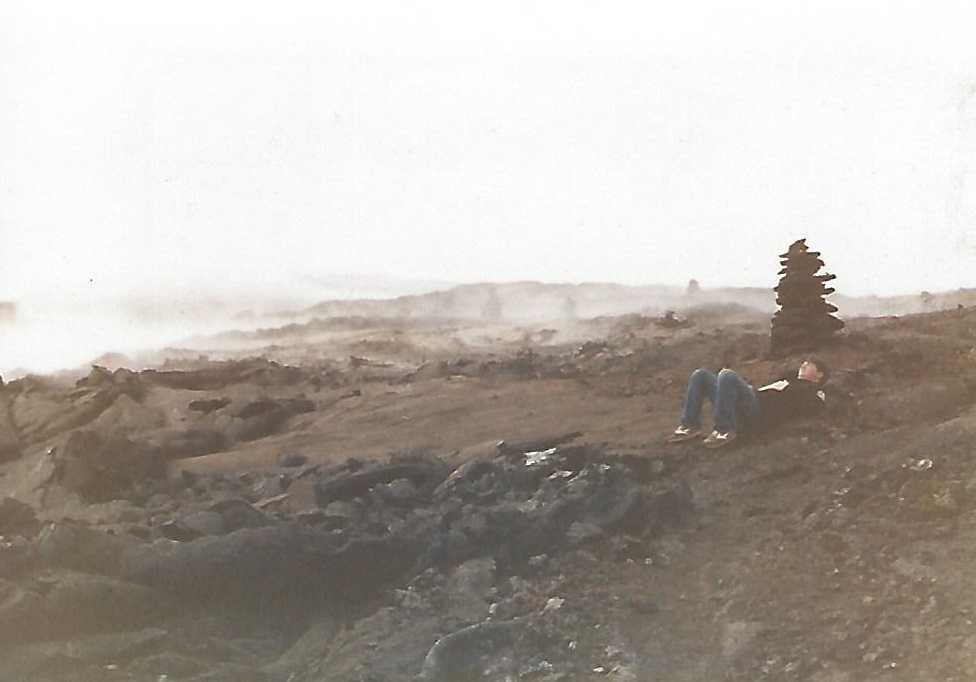